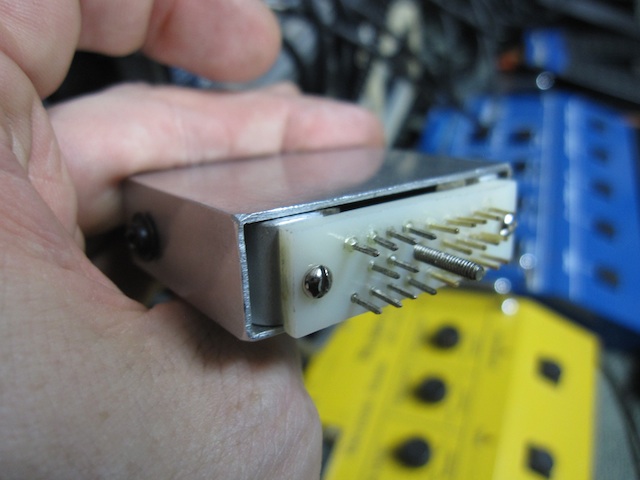 The first generation of Roland guitar synthesisers used a totally unique 24 pin connector. This was apparently built specifically for Roland and was never used by any other manufacturer. Consequently, the connectors and cables are hard to find and tend to fetch crazy prices on Ebay. Wayne Joness site goes into the issue in depth. Quite some time ago, I moved to using ubiquitous DB-25 pin connectors to replace the 24 pin connectors on my guitars. This is an approach also done by Wayne. While I was happy to mod the instruments (since they are mostly modified in other ways as well, so keeping them stock is not important), I didn’t want to mod the guitar synths, such as a GR-100, GR-300 and BX-13 (Wayne’s 24 pin to 13 pin adapter), since it is more work (particularly on the GR-100).

The solution is to create DB-25 to Roland 24 pin cables, matching the pin numbers from the 24 pin to the DB-25 (the same pinout conversion standard is used by Wayne). I had done this in the past by salvaging the male 24 pin connector from the guitar and moving it to the special cable, and I modified an old metal printer cover. However, these covers can also be hard to source. I also needed an extra male 24 pin connector.

Inspired by a posting by rdunna on instructables about his efforts building a 24 pin male connector, I did something similar. Instead of using circuit board for the base to mount the edge connector pins, I opted for an off cut of perspex. This was drilled with a 1/32″ drill bit using the trusty Dremel with it’s drill press attachment. I created a scaled version of the original image posted by rdunna so it could act as a 1:1 drill template (see below for downloadable PDF). Print this with no scaling should give you the correct spacing for a drill template. To attach the edge connector pins I used epoxy glue, using a spare piece of perspex spaced 5mm from the base to ensure the pins are all the right depth. Before the glue completely hardened (i.e after a couple of hours of drying), I aligned the pins into the female connector to ensure the pins were exactly right. I used a 2-56 1/2″ screw as the alignment pin which needs to protrude 10mm from the perspex base.

With the connector itself built, the cover was the next task. After considering a number of approaches, since I had some rectangular aluminium extruded tubing available, that became a slip on cover. Using some 1/2″ L shaped channel, I cut and drilled the strip to allow bending (very gently as aluminium will break). All the holes were drilled with a drill press. Two side screws hold the interior and exterior portions and allow disassembly. Fitting a strain relief and a couple of cable ties makes the connector rock & roll robust. I wouldn’t assume it’s of the same robustness as the originals in terms of continuously unplugging and plugging in, but for situations where it mostly remains connected, it works fine for me, as shown installed into the (pretty grubby) GR-100. I built two, the first with an original male 24 pin connector, the second with a home made connector. Overall, not too difficult to produce something that works, although building a female version would be quite a bit more work. Perhaps a 3D printer combined with adapting some other multi pin metal socket would be suitable. If anyone is interested in pursuing this, contact me as I have a near complete 3D model of the Roland 24 pin female connector.